Life and Death of Ismail Agha Shikak, aka Simko

Simko Shikak (also known as “Simitquh”; born Ismail Agha Shikak in 1887; died 1930) was a Kurdish chieftain of the Shakak tribe (Shekak also Shakkak or Shikakan) is considered as the largest among all theKurdish tribes in the West Azerbaijan province of Iran and the adjacent area of Turkey. This large tribe lives around the city of Maku and south as far as Urmia. Among the clans of the Shekak are the ‘Awdoǐ. According to their oral history they came from Diyarbakır in the 17th Century and settled west of Lake Urmia, which displaced the Dumbulī tribe.The first known chieftain of the ‘Awdoǐ was Ismail Agha who died in 1816 and whose tomb is beside the Naslu River. His grandson Jafar Agha was executed as a bandit in Tabriz in 1905, Jafar’s brother, Simko Shikak, was responsible for leading the anti-Christian massacres in the area before and during World War I and for trying to create an independent Kurdistan in the 1920s.
They speak the Kurmanji dialect of the Kurdish language, (Shakaki sub_dialect). The Shekak consists of many clans and families). He was born into a prominent Kurdish feudal family based in Chihriq castle located near the Baranduz river in the Urmia region of northwestern Iran n West Azarbaijan Province, Salmas County, near the Turkish border. The Feudalism was a set of legal and military customs in medieval Europe that flourished between the 9th and 15th centuries, which, broadly defined, was a system for structuring society around relationships derived from the holding of land in exchange for service or labour. By 1920 parts of Iranian Azerbaijan located west of Lake Urmia were under his control. He led Kurdish farmers into battle and defeated the Iranian army on several occasions. The Iranian government had him assassinated in 1930Simko took part in the massacre of the Assyrians of Khoy and instigated the massacre of 1000 Assyrians in Salmas.

His family was one of the most prominent and politically active Kurdish families throughout Qajar reign from the late 18th to early 20th century. Sadiq Khan Shikak was one of the generals and governors in the Agha Muhammad Khan‘s [1] early Qajar state and was commanding a force of 10,000 soldiers. However, he was soon fell out of favor and Qajar monarch attempted to murder him. Sadiq Khan has been accused of taking part in the assassination of Qajar king in the town of Shusha [2] in 1797. Among other prominent members of the family are Ismail Khan The Great and his son Ali Khan, Muhammad Pasha son of Ali Khan, Cewer (Ja’afar) Agha brother of Simko. Many members of the family were murdered by the Qajar state such as Cewer(Dja’far) Agha who was killed at Tabriz by the order of governor general.

In 1905, the Qajar monarch Mozafar-al-Din Shah [3] appointed Husein Qulikhan Nizamul-saltana as the general governor of Azerbaijan. According to Iranian historian Ahmad Kasravi, Nizamul-saltana officially invited Cewer Agha to Tabriz in order to consult him on the border issues between Iran and the Ottoman Empire. Once Cewer Agha arrived in Tabriz, Nizamul-saltana ordered Muhammad Hussein Khan Zargham to invite Cewer Agha to his own residence and murder him. Cewer Agha was accompanied by seven of his guards including one of his uncles. Muhammad Ali Mirza, the Iranian Crown Prince, ordered his murder via telegraph sent to Nizamul-saltana. Five of Cewer Agha’s guards managed to escape from the murder plot in Tabriz in a ferocious battle and return to Chari castle. Cewer’s father, Muhammad Agha, sought help from Sultan Abdulhamid II in Istanbul to avenge the murder of his son. However Iranian envoy in Ottoman court managed to counter his efforts and according to some sources, Muhammad Agha was assassinated in a Qajar conspiracy in Istanbul. Murder of Cewer Agha caused outrage among the Kurds. Moreover many Iranian intellectuals and constitutionalists in Tabriz and Tehran condemned his assassination. 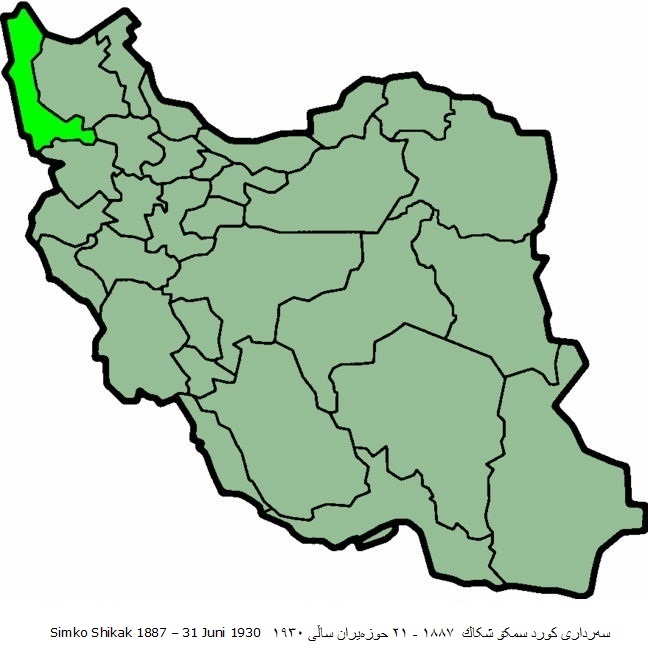 In March 1918, under the pretext of meeting for the purpose of cooperation, Simko arranged the assassination of the Assyrian Nestorian patriarch, Mar Shamon, ambushing him and his 150 guards as Mar Shimon was entering his carriage. After the murder of Mar Shimun, the Hakkari Christians took revenge on the Muslim population of Salmas and most of the villages of Salmas County, while Simko and his men massacred Christians in Khoy.

By summer 1918, Simko had established his authority in the region west of Lake Urmia. After this, he organized his forces to fight the Iranian army in the region and managed to expand the area under his control to nearby towns and cities such as Mahabad, Khoy, Miandoab, Maku and Piranshahr in a series of battles.

At this time, government in Tehran tried to reach an agreement with Simko on the basis of limited Kurdish autonomy. Simko had organized a strong Kurdish army which was much stronger than Iranian government forces. Since the central government could not control his activities, he continued to expand the area under his control and by 1922, cities of Baneh and Sardasht were under his administration.

In the battle of sari Taj in 1922, Simko’s forces could not resist the Iranian Army’s onslaught in the region of Salmas and were finally defeated and the castle of Chari was occupied. The strength of the Iranian Army force dispatched against Simko was 10,000 soldiers. Simko and one thousand of his mounted soldiers took refuge in nearby Turkey, and they were forced to lay down their weapons.

After the murder of Shimun XXI Benyamin [4] by Simko, Agha Petros [5] joined forces with Malik Khoshaba [6] and defeated Simko’s forces driving Simko from his stronghold at Koynashahr. In 1930, the commander of Iranian Army General Hassan Muqaddam sent a letter to Simko who was residing in the village of Barzan, and invited him for a meeting in the town of Oshnaviyeh [7].
After consulting with his friends, Simko along with Khorshid Agha Harki went to Oshnaviyeh and were invited to the house of local army commander, Colonel Norouzi and were told to wait for the Iranian general. Colonel Norouzi convinced Simko to go to the outskirts of the town to welcome the general’s arrival. However, this was a trap and Simko was ambushed and killed on the evening of June 30, 1930.
Political life

There are different and conflicting views about Simko among Kurdish historians. After the murder of Cewer Agha, Simko became the head of Shikak forces. At this time, Iranian government was trying to assassinate him like the other members of his family. In 1919, Mukarramul-Molk, the governor of Azerbaijan, with the help of Armenians, devised a plot to kill Simko by sending him a present with a bomb hidden in it. Although the plot failed, but it revealed the intentions of the Iranian government, and propelled Simko into a turbulent period of political and military confrontation with Iran.

Simko was in contact with other Kurdish nationalists such as Abdurrazaq Badrkhan (Bedirxan) and Seyyed Taha Gilani (grandson of Sheikh Ubaidullah Nahri who had revolted against Iran in 1880s). Seyyed Taha was a Kurdish nationalist who was conducting propaganda among the Iranian Kurds for the union of east Kurdistan (Iranian Kurdistan) and  north kurdistan (Turkish Kurdistan) in an independent state. He was also aware of the international geopolitics and modern nationalism. In one of his letters to Iranian authorities, he talks about the right of self-rule and autonomy for the Kurds and compares Kurdish demands with similar demands of other nationalities in Europe.

The first schools for Kurds were established in Mahabaad in 1909 by international missionaries operating under the Lutheran Orient Mission. This is also where the first Kurdish periodical appeared, though it did not last long. Simko attacked the Kurdish and other inhabitants of Mahabaad operating on the fringes of the Ottoman army. The schools in Mahabaad recovered only when the surviving missionaries dared to return in 1920 when Simko’s rampaging was being brought in check by the Iranian army. In 1912, Simko and Abdul-razzaq Badirkhan established a Kurdish journal in Iran , a monthly magazine titled Kurdistan. Moreover, he opened a Kurdish school in the north-western city of Khoy. These cultural activities were mainly organized by an association named Cîhandanî based in Khoy. From 1919 up to the end of his movement in 1922, he also published a newspaper titled Roja Kurd which was the official organ of his government in Urmia. The editor-in-chief of Roja Kurd was Muhammad Turjanizade.

This entry was posted in FlashBack and tagged Simko. Bookmark the permalink.